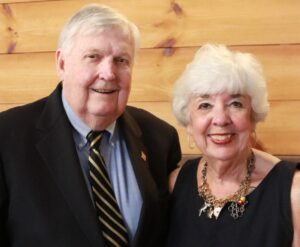 It is with profound sadness that we learned this week of the passing of Dr. Donald C. Jones, former Executive Director of the Henderson County Education Foundation.
Dr. Jones had a long history of leadership with the Foundation, first serving on the Board from 2000-2004, then as its Board President from 2004-2006, and subsequently as its Executive Director from 2006-2014.
Through his leadership, the Foundation raised funds for local student enrichment activities such as Flat Rock Playhouse performances, college scholarships for high school seniors, and small grants for teachers to enhance their efficacy in local classrooms.
“Dr. Jones has left an incredible legacy through the many lives he touched and his unwavering passion for the children of Henderson County,” said Peggy Marshall, Executive Director of the Henderson County Education Foundation.
A former educator at the elementary, high school, and collegiate levels, Dr. Jones was driven by a vision for educational excellence in Henderson County Public Schools (HCPS). Backed by 20 years of experience as a motivational speaker, he spent 14 years promoting the Foundation’s mission, raising hundreds of thousands of dollars in the process. His management and promotional skills greatly increased the Foundation’s profile and awareness throughout Henderson County.
During his 10 years as President and Executive Director, Jones increased the dollar amounts and extended the reach of the Foundation’s scholarship program – increasing the number of annual scholarships awarded from four to 63 each year, valuing at least $150,000 annually, and totaling more than $1,888,880 during his tenure.
In his first year as Executive Director, Jones also created the Annual HCEF Fall Golf Classic, which continues to be the Foundation’s largest fundraising event of the year. Jones is also credited for establishing and maintaining the HCEF Hall of Fame (2004-14), which was one of only five in the state during the program’s inception.  Dr. Jones was named a member of the Hall of Fame in 2019.
In 2011, Dr. Jones received the Henderson County Chamber of Commerce’s prestigious Education Champion award.
On behalf of the Foundation Board of Directors and staff, our prayers are with his wife, Patsy Farmer Jones, and the entire family.