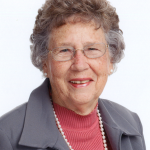 Ruby Hernandez was a fixture as secretary at Mills River Elementary for 28 years, from 1964-92. She is described as very friendly to children and parents, often working out many families’ concerns and ever amplifying school attributes. Loyal to Mills River, she declined central office jobs to stay where she was. She started her educational career in 1949 as assistant secretary to Buncombe County Public Schools Supt. T.C. Roberson, after whom an area high school is named.