Jason Rhodes Nominated for “National LifeChanger of the Year” Award 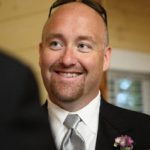 Jason Rhodes, an English teacher at Balfour Education Center, has been nominated for National Life Group’s 2016-2017 “National LifeChanger of the Year” Award.

LifeChanger of the Year is an annual program created in 2012 by National Life Group to recognize and celebrate K-12 educators and school system employees who impact students’ lives through leadership and positive influence.

Rhodes was nominated by a member of the community who wishes to remain anonymous, according to a National Life Group Foundation news release. He is the second Balfour teacher in two years to be nominated for the award, following Kristi Kicklighter, formerly an English and social studies teacher at the school, who was nominated during the 2014-2015 school year and advanced to Second Runner-Up, receiving a $5,000 prize.

The National Life Group Foundation’s news release details Rhodes’ educational career, which began at a traditional high school before he left to pursue a career in professional development for teachers. Afterward, he handled communications for a large school district. He missed the students, however, so he took on several odd jobs to support his family so that he could return to the classroom. He began teaching high school English at Balfour Education Center, where he knew he would make a difference. “Mr. Rhodes is absolutely the right teacher for Balfour’s students,” his nominator said. “These students need to be shown care and compassion more than anything. They see Mr. Rhodes as someone who cares about them. As a result, they will work with him and develop strong relationships with him.”

“Jason is kind, understanding, compassionate, and passionate. His first priority in his classroom is to establish a safe and friendly learning atmosphere where his students feel like a family,” said Balfour principal Kent Parent. “Jason accepts students where they are; he assesses them to develop strategies to reach them.”

Parent said, “One of the most powerful things that I have heard Jason say to his students is, ‘I loved you even before you were enrolled into my class; that is why I am a teacher.’”

Check out Rhodes’ nominee page on the blog at lifechangeroftheyear.com/jason-rhodes/.

About LifeChanger of the Year Awards
For 2016-2017, there will be a total of 15 individual LifeChanger of the Year awards. In addition, a 16th prize, the “National Spirit Award,” is given to the school and nominee whose community demonstrates the most support for their nomination. Each winner will receive a cash award that is split between the individual winner and their school. The national Grand Prize award is $10,000. Winners are announced via surprise award ceremonies held at their schools. The top five winners will also be honored at a national awards ceremony in Naples, Florida. Winners will be announced in Spring 2017.