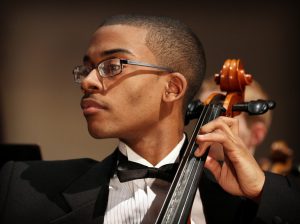 Named in honor of Dr. Mae Adele Berrian, an historic honoree of the Henderson County Education Foundation who willed a large sum of money to start the long-term Berrian Fund for the HCPS strings programs, the free festival provides the district’s orchestra programs the opportunity to learn from and be inspired by talented professional clinicians, improve their craft by playing challenging music selections, and give back to the community by performing a free concert.

Joshua Miller is a native of Spartanburg, S.C. and is in his fifth year teaching orchestra, currently at both Boiling Springs Middle and Boiling Springs 9th Grade Campus in the Spartanburg School District Two. Prior to his current position, Miller taught orchestra for grades 5-12 in Anderson School District One. As a music educator his philosophy is that fundamentals are the key to musical success. During his tenure as orchestra teacher in South Carolina, his performance groups have earned Superior ratings at the South Carolina Upstate Region 2 Concert Festival, and he’s had students selected to participate in All-County, Region, and All-State orchestras.

Miller holds a Bachelor of Music degree in Music Education from Furman University in Greenville, S.C., and currently resides in Inman, S.C. with his wife, Raven, and son, Asher. He enjoys teaching private lessons, playing piano for his church and working with nonprofit youth organizations such as the Boys and Girls Clubs and the YMCA.