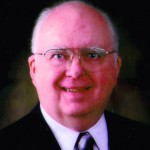 Dr. Flynn is identified with West Henderson High history. As its first student body president, he came up with the Falcon mascot and red, white and blue school colors. He returned as its principal for a dozen years (1980-92), the longest tenure leading West. He innovated in-school suspension and computerized student scheduling. He then moved on to the central office for a decade to cap 35 years in local administration. He crafted the school reassignment selection process for transfers out of zones, precautions against intruder violence and handicapped bus radio communication to boost safety.