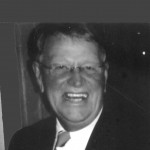 Bill Whitmire, 76, coached for 30 years starting in 1963, mainly at Edneyville. He and Tom Pryor were the school’s only coaches for years, with Pryor handling the defense and Whitmire the offense. His quarterbacks included Don Dalton and David Jones, now the school superintendent. Whitmire’s motto for his hard-hitting good sports was “knock their kids down. Pick them up off the ground, and pat them on the back.” Bill and his brothers Blondie, John and Pat Whitmire starred for Hendersonville High, winning four state basketball titles in the late Forties and early Fifties.